In this note I’d like to give proof to a well known probabilistic interpretation of the AUC model fit statistic. I’ve had trouble locating an intuitive proof of this result online and in the literature.

This argument is entirely due to my co-worker Jack Bennetto, I’ve just made some figures and typed it up.

The AUC is a popular measurement used for comparing goodness of fit of classification models in machine learning. The AUC makes sense for any model that produces a scoring of the data points in a set, with the model assigning a higher score to those data points it feels are more likely to belong to the positive class. The most popular ranking models actually estimate conditional probabilities of class membership:

Plotting all of these pairs as the threshold is varied across its range traces out the ROC curve. 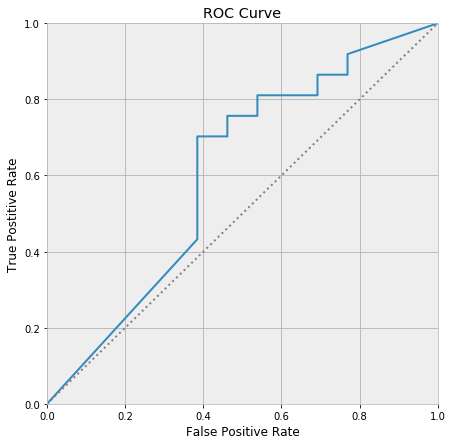 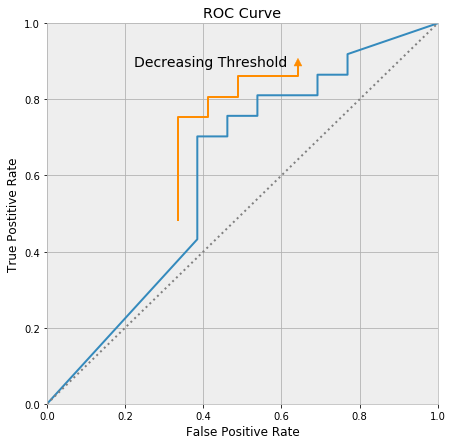 The AUC is the area under the ROC curve. It is a number between zero and one, because the ROC curve fits inside a unit square. Any model worth much of anything has an AUC larger than 0.5, as the line segment running between (0, 0) and (1, 1) represents a model that randomly guesses class membership.

The AUC seems arbitrary when first encountered. It certainly has some nice properties, but it has an ad-hoc and slapdash flavor, and it’s unclear if it is attempting to communicate anything essential about the world. Luckily, the AUC has a very nice probabilistic interpretation:

Our intention here is to give a proof to this fact. 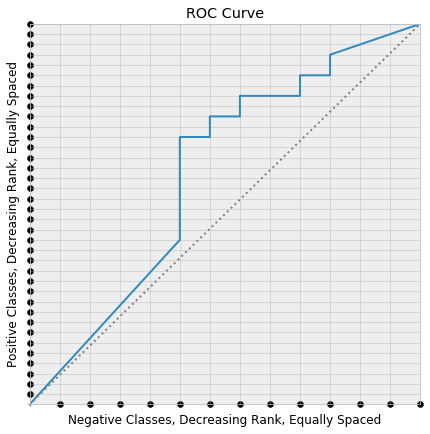 We have layed the positive classes in our dataset equally spaced along the y-axis. The positive data point ranked highest by the model is placed closest to (0, 0), and the model score of the data points decrease as we move in the positive y-direction. We’ve neglected to lay a point at (0, 0), which is a technical detail that helps the counting work out.

The same was down with the negative classes, this time along the x-axis. If the coordinates of these two layouts are taken together, the result is a rectangular lattice in the square, which is also pictured.

Now consider picking a random positive class, coloring it orange, and drawing the horizontal line through the square that leaves from that point. Say that this is the $k$’th positive class. 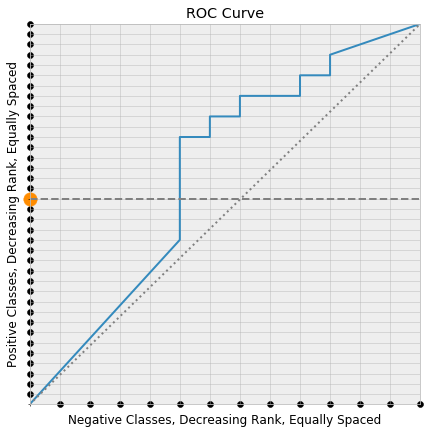 This horizontal line first meets the ROC curve at one of the lattice points, the green point below: 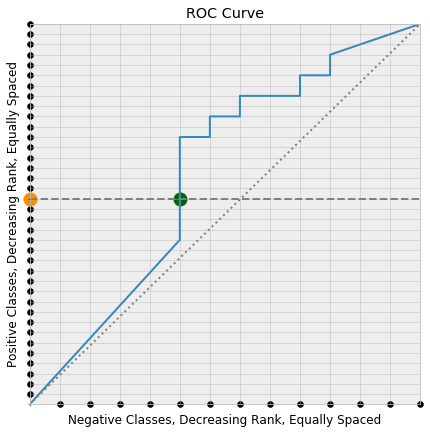 But the positive classes were layed down along the y-axis in order of decreasing score, so the actual points that are correctly classified to produce this true positive rate are the first $k$ points along the y-axis. Consequently, the threshold corresponding to the green point on the ROC curve is the minimal possible threshold that classifies the orange point correctly (i.e. as a positive class).

and drawing the corresponding horizontal and vertical lines. 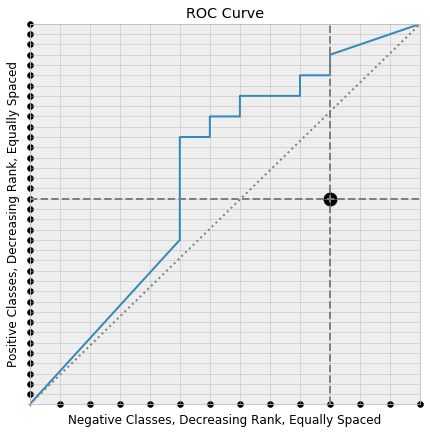